Symbols of PA’s Proud Past and Bright Future 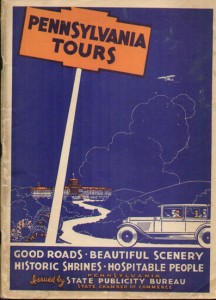 A proud symbol of a proud state, the Keystone Marker shape is featured prominently in this traveler’s guide to Pennsylvania from 1929. (Courtesy of Christian Busch).

In shape, color, location, text, design, construction, material, and history, the Keystone Markers speak what it means to be from Pennsylvania. The markers once showcased the power and pride we had in our state. Their restoration and replacement re-affirms those virtues as a confident foundation for investment in all the ways we need.

Shape: The marker’s distinctive shape reflects our once-revered status as the keystone of the American states. Pennsylvania once led the growing nation in all aspects of technological and social progressivism to which American ascendancy may well be ascribed. Road building was no exception, and Pennsylvania was a pioneer in both road construction and the promotion of highways as courses of tourism as well as commerce.

Color:  The signs are painted in our state’s official colors, Pennsylvania Blue and Gold/Yellow.  We have special paint formulas to match the official state colors.

Location:  The markers were placed at each of the principle entrances to our towns and cities. They also marked other places of interest, including rivers, creeks, trails, etc.  The markers always served as much to spark interest in the Pennsylvania places they represented as much as they were useful for wayfinding. Many towns had multiple markers along each of their principle thoroughfares.

Text:  The markers indicate not just where you are but also the name of the next town and the distance to it.  They also included a bit about how the town got its name.  They were oriented, then, not just for helping travelers find their way but also toward sparking interest in the place they denoted. See also what the markers denote.

Design: Markers consist of a sign and pole. Close inspection of the markers reveals the level of sophistication in design that was common to the ferrous industries upon which Pennsylvania was built. The historic poles dovetail perfectly with the signs.  That so many markers have stood for over 60 years with no maintenance is a testament to the quality of their design.

Construction:  The markers were constructed right here in Pennsylvania.  Our replicas and replacement parts will be as well.

Material:  Constructed of cast iron, the keystone signs and their specially-designed ornate pole were products of Pennsylvania’s proud iron industry and worked together to make a strongly positive and memorable statement of place.  Pennsylvania was the earliest iron maker in the colonies and its iron and steel literally built the nation.  Everything from locomotives to the Golden Gate Bridge and Panama Canal lock gates were built in Pennsylvania.

One of the earliest turnpikes in the nation between Philadelphia and Lancaster was begun in 1793, and proved the financial advantages of a well-manicured highway. The first federally-funded interstate highway, the National Road, was constructed through the Commonwealth in 1811. In 1913, the Lincoln Highway Association was formed to build one of the first modern transcontinental roads, and its route would cross the length of Pennsylvania. The Pennsylvania Turnpike, opened October 1, 1940, was considered to be the embodiment of the future of modern travel and set design precedents copied around the world.

The Keystone Markers are tangible reminders of this great heritage and serve as inspiration for the future.

View the Markers:  Use the Marker Database link on this website. The largest number of them that we know of are “Town Name” markers, and these are listed alphabetically in our database.  Others noted the names of creeks or rivers.  These were double-sided so that only one marker per bridge crossing was needed.  Look for these under “Waterways”.  There are markers for “State Facilities and Universities”. Still others marked sites of historic significance;  these are under “Historic Sites”.  There were once “Large Markers” at certain areas around the state, mostly at high points on major routes. Prior to, and concurrent with these others, routine highway traffic signs, such as “School Zone” or “Danger Steep Hill” were also made on these iron keystones.  Only a few survive, and these and archival photos of others can be found under “Traffic Markers”.

Guardians of the Gateway: Essential Elements for a Healthy Town

As distinguished planner, scholar, and senior resident fellow at the Urban Land Institute Edward McMahon has said, “The gateway into a community is like its ‘front door.’ It provides the introduction to a community. It can either express a community’s pride and sense of place or it can give a community a poor public image.”

Truly, the Keystone Markers make a positive first impression, but consider it for yourself. (The following sections are taken from Mr. McMahon’s work in Better Models for Development in Pennsylvania.)

Compare the photos of the community gateways above. Then ask yourself the following questions:

Many parts of a town or community have boundaries drawn around them. These boundaries usually exist in people’s minds. They mark the end of one kind of activity or one kind of place and the beginning of another. In many cases, a community can be made more memorable, more vivid, more alive if the boundary that exists in people’s minds also exists physically on the ground. In rural areas, gateways provide an area of transition between town and countryside; in urban areas they help mark the boundaries between one community or neighborhood and another.

Things you should know:

Important to Citizens as Well as Visitors

The Keystone Markers are essential in defining a sense of place individually for each community, but also establishing an identity of individual communities as an important part of the greater collective that is Pennsylvania.  Further, we see the markers as powerful reminders to Pennsylvanians about their own role as citizens of their community, of Pennsylvania, and the nation.

Each time a traveler crosses the threshold into a Pennsylvania town, the very visible image of the Keystone Marker reminds them that not only the town itself but also they, in their everyday role in it, be it as parents, taxpayers, educators, civil servants, volunteers, etc., hold a keystone place in the great arch of American life.  As powerful if subtle affirmations of the place Pennsylvanians have, do, and can hold in the world, the markers remind us of our responsibilities as custodians for the future rather than mere consumers in the present.