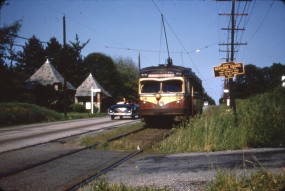 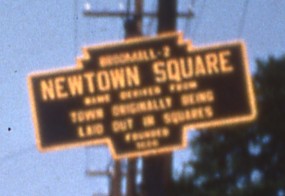 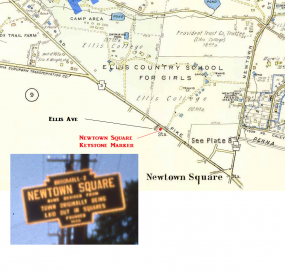 Located on south side of West Chester Pike west of Rt. 252. The structures across the Pike marked the entrance to the Ellis College for Girls, according to Doug Humes of the Newtown Square Historical Society.

Humes also disputes the marker’s explanation of the town name:

“The town was planned as one of two inland ‘New Towns’ by William Penn. He located one in what was then Chester County, and another one in Bucks County. His surveyor Thomas Holme identified both on a 1687 map as ‘New Town’. I imagine that like many developers, they planned to give the towns a fancier name later on. But today, those two towns still exist and are still called Newtown. But there was a square planned for the center of town, at the intersection of Rt 252 and Goshen Road. Penn’s idea was that for every 100 acres or so that you bought in the country, you would also receive a parcel in the planned town.”