Found 2012 among a group of broken markers at the Adams Co. PennDot garage. Deemed unrepairable, nor do we know where it was originally located. Pieces of this marker will be used to repair other markers with missing sections.

This is a typical double-sided stream marker that was once on a top mount post. 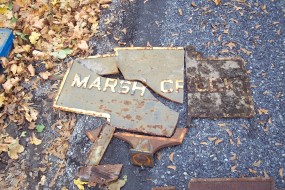