Unusual use of a name that evidently no longer exists. Village is now known as Ranshaw.  Newspaper clipping describes 2000 re-installation at the edge of town by PennDOT. 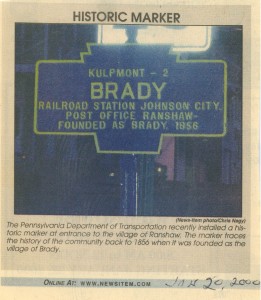 This marker would likey have been on PA Route 61 at the west edge of town.  Kulpmont is to the east.

As of 2014, review of PennDot Video Log indicates this marker is no longer there.