Only evidence that this marker ever existed is this 2003 newspaper photograph which shows it heavily damaged. It was found under a bridge. Marker would have stood at the west edge of town. “Next town” is the now ghost town of Centralia. 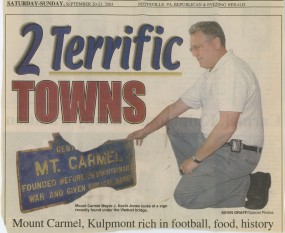