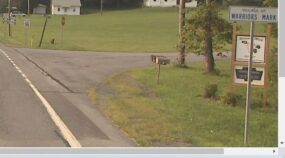 No longer on the roadside.  In possession of town. Likely originally located along PA Route 550 at west end of town.

As of 2018, town has erected replicas at each end of the borough.